TJCOG is a key player in regional efforts that span cross-jurisdictional boundaries, including transportation planning, development and land-use coordination, water resources and infrastructure, sustainability, and regional economic development strategies. Additionally, the organization houses the Triangle J Area Agency on Aging, which oversees county aging initiatives and serves as a central source of information for older adults and their caregivers.

For a highlight of projects and programs from the past year, check out the TJCOG 2018-2019 Year in Review.

An Extension of Our Local Government Members

TJCOG is a local government by law but is also a member organization and relies on both the support and engagement of our member governments for existence and relevance. As the needs of our members change, the services TJCOG provides similarly change.

Who are our members? 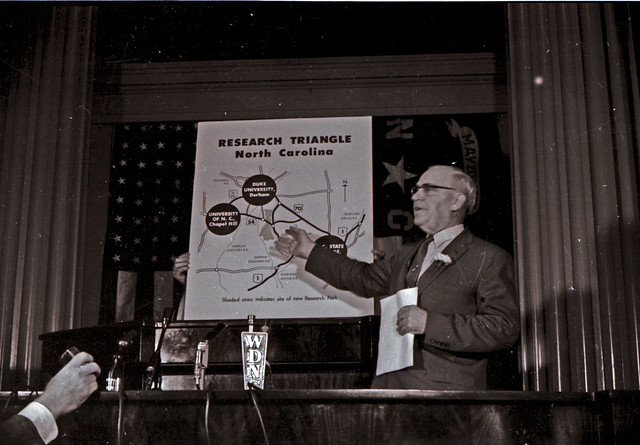 With the creation of the Research Triangle Park in the 1950s came the need for coordination of development between its surrounding cities, towns, and counties. Governor Luther Hodges hosted a meeting of representatives from Durham, Orange, and Wake counties; the cities of Durham and Raleigh; and the town of Chapel Hill. These local governments decided to form the Research Triangle Regional Planning Commission.

In 1970, Governor Scott created the Councils of Government system that exists today by designating seventeen Regional Councils or Councils of Governments across the state (from west to east), each identified by a letter of the alphabet. The Research Triangle Regional Planning Commission became the Triangle J Council of Governments serving the counties of Chatham, Durham, Johnston, Lee, Orange and Wake, and the municipalities in those counties. Moore County was added to the region in April 2001.